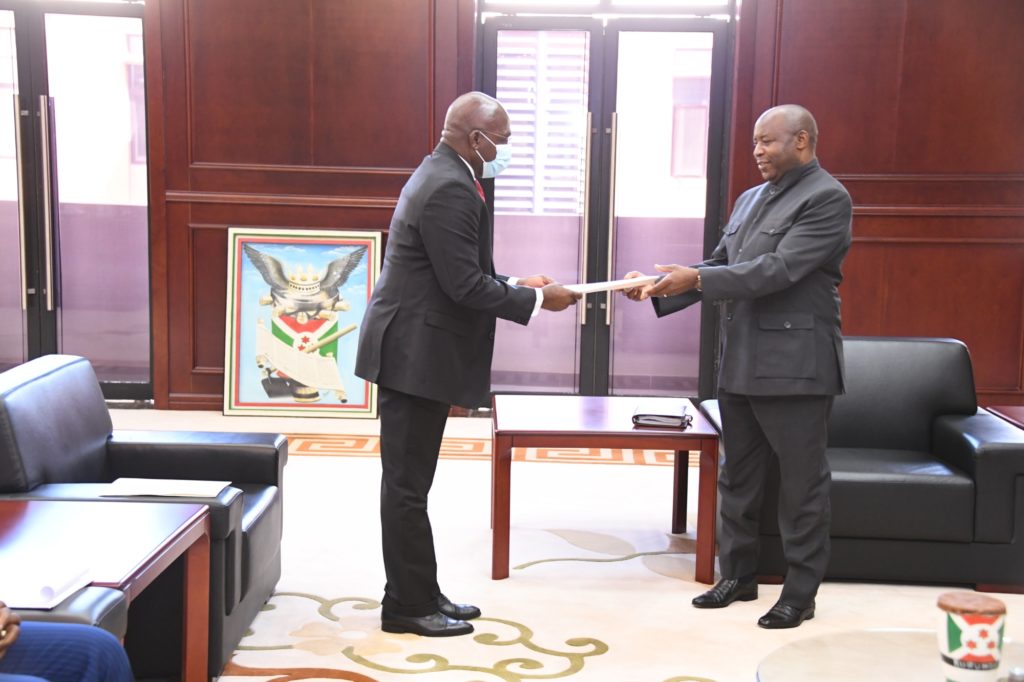 The President of the Republic, His Excellency Evariste Ndayishimiye granted an audience, on Tuesday December 8, 2020 at Ntare Rushatsi Presidential Palace, to the Minister of External Relations of the Republic of Angola.

His Excellency Têtè ANTONIO was heading a strong multidisciplinary delegation composed of the Executive Secretary of the International Conference on the Great Lakes Region (ICGLR), and certain senior officials of the Angolan Ministry of External Relations.

At the end of the audience, the Minister of External Relations of the Republic of Angola revealed that he was carrying a message from His Excellency the President of the Angolan Republic transmitting, among other things, his wishes for happiness and prosperity to his Burundian counterpart, His Excellency President Evariste NDAYISHIMIYE and to the Burundian people.

During this meeting, the two high authorities discussed ways and means to strengthen the already excellent bilateral relations between Burundi and Angola. The Head of Angolan Diplomacy expressed his gratitude for the rich meeting that His Excellency the President of the Burundian Republic held with his Angolan counterpart, His Excellency Joào Lourenço on the sidelines of the Summit of Heads of State and Governments of the Economic Community of Central African States recently held in Libreville, Gabon. He conveyed the wish of the Angolan Head of State to continue this interview as soon as possible.

His Excellency Têtè ANTONIO further hailed the effective response provided by Burundi to COVID-19. He indicated, to this end, that he intends to discuss with the Burundian health authorities in order to allow Angola to learn from the Burundian experience with regard to the fight against this pandemic.

Since it is Angola which chairs the summit of Heads of State and Government of the ICGLR and its Executive Secretariat, the Angolan Minister of External Relations took this opportunity to present to His Excellency the President of the Republic of Burundi the New Executive Secretary of the ICGLR, Amb. João Samuel, elected for a 2-year term, and to seek Burundi’s support for the latter.